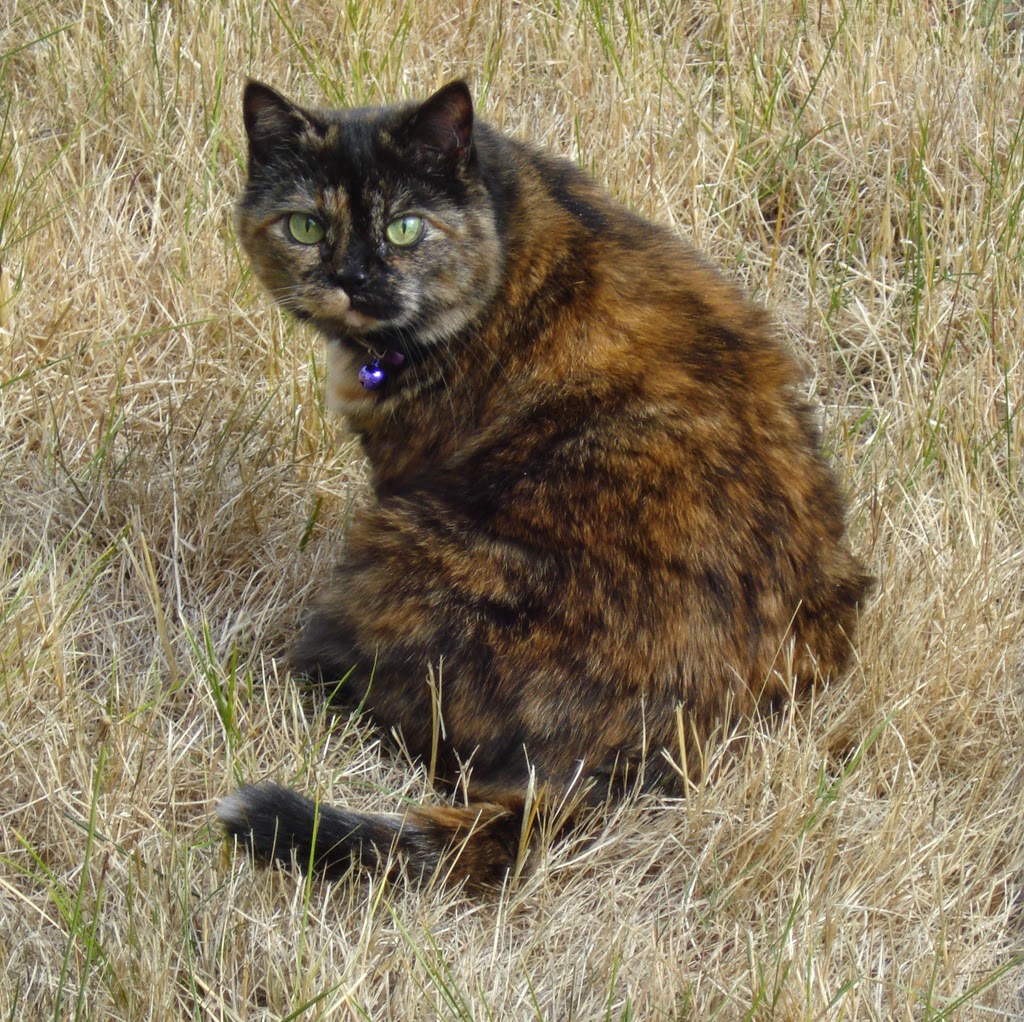 “The whole genus has power issues, I think,” Cara muttered.

“Come with me,” Dave reached out a hand to Cara and both she and Marcy followed him upstairs. He paused in the hallway to grab a pair of binoculars and the three of them mounted two flights of  stairs to the top of the Hall’s home.

The top floor was one open room under the eaves, with storage and some work areas for both Marcy and Dave.  At one end there were French doors that opened onto a small balcony which overlooked Cara’s yard.  They were just high enough that they could see over Cara’s small house to the lot beyond.  Dave handed the binoculars to Cara.

What Cara saw stunned her.  In the center of the small lot was a point from which all the many tendrils of blackberry seemed to originate.  From this view it looked like a great green, thorny maw with hundreds of green arms, reach out in all directions.  It reminded her of the mouth of a giant squid, or the mythical beast the Kraken.  She looked to Dave for an explanation.

“I would normally say that nature is inherently benign, that the universe is in a continual cycle of creation which is ultimately positive and productive.  That is the tradition that I was raised with.  But,” he paused, looking long at the mass of the blackberry, “even I have to admit that now and then something is spawned that is beyond nature itself.  I have never seen anything like that plant before, not in all my years studying the flora of this region.”

“Are you saying that blackberry is evil?”  Cara pressed.

Dave was clearly uncomfortable with the question.  “I am not sure what I am saying, actually.  But there is something odd about those canes that is not quite right, something which I cannot resolve through nature.”

“Who would we complain to?  The lot is owned by a holding company.  We’d be hard pressed to get them to do anything.  Hopefully, they will find a buyer for it and the plant will be eradicated in whatever follows.  I don’t think there is much we can legally do, and the county has countless locations that are overgrown,  exactly like this.  They are not about to start interfering, especially if someone tries to make a case to them about possessed flora.”  Dave smiled at Cara who returned his gaze with worry in her eyes.

“Maybe I shouldn’t have told you the story,” he continued, “I hoped it might amuse you.  Just try and keep your yard clear of it and hope for the best.  You’ll be all right.”

It didn’t turn out to be as easy as that.  For every cane of blackberry Cara lopped off, it seemed like three more topped the fence over night.  She had to upgrade from the loppers to scythe which she borrowed from the Hall’s to fight the canes.  It was an ongoing war, with Marcy finally bringing Cara her own jar of the herbal salve to combat the continual scratches.  Cara took to wearing long sleeves and her longest skirts to work.  She would only let Kiley play in the front yard, and then, only when there was some one to watch her.  Sprinkles was confined to the house, which did not go over well as the cat felt entitled to wander and police its territory.  She sat at one door or the other, in turn, looking hopeful to be let out and howling when she was not.

It all cut loose one evening when Sprinkles escaped out the kitchen door and into the back yard.  Kiley raced out after her.  They had just finished the dinner dishes and Cara was in the front of the house turning on the living room lights as the sun set. She did not realize what had happened until she heard a piercing scream from Kiley.

And then the words any parent would dread:  “Help, Mommy!  Help me!”

Cara ran to the back door, her heart slamming in her throat when she saw the cat entwined in blackberry vines, clawing and spitting as it was being pulled up and over the fence.  Kiley was just three feet from Sprinkles, her arms half wrapped in plant, and being viciously pulled after the cat.  Cara grabbed the scythe from where she’d hung it above the kitchen door, out of Kiley’s reach, and flew to the fence.  She hacked at the blackberry, screaming at the top of her lungs, desperate to free her daughter, and the cat.

Marcy and Dave heard the screaming and came running, followed swiftly by both Roger and his brother Dan.  Marcy pulled Kiley away just as Cara hacked her free. Dave grabbed the scythe from Cara. Together he and the boys freed the cat.  They all pulled back to the center of the yard and watched the hacked ends of the blackberry make a slithering retreat over the fence.

Kiley was weeping, as the boys pulled wilting vines free of the exhausted cat.

“Let’s go in the house.” Dave said quietly and they all trooped into Cara’s kitchen.  Marcy began to bathe Kiley’s scratches, which wasn’t easy.  For one thing, no one seemed in a hurry to turn on any lights.  Secondly, though the child had stopped crying she refused to let go of Sprinkles, who was being cradled in her arms.  Marcy finally started bathing them both together and applying salve as she could.

Cara splashed water on her face, toweled it off, took a deep breath and turned to face them all.  “Thank you,” was all she could manage to say.  She looked directly at Dave, “No one will believe us, you know.  Even though there are five of us who saw that thing, and what it was doing to them.”

“Six!” Kiley piped with a sniff.

Cara kept her gaze on Dave, “You know they won’t believe us.”

“I know.”  He looked thoughtful for a few moments, considering what he’d just seen and what he knew about the situation.

He walked over to the closet by the back door, “Is this where your yard tools are kept?”
He knew she didn’t have a basement or an outdoor shed.

He opened it and rummaged through it in the semi-darkness, drawing out a stout garden rake with thick, strong tines – the old fashioned kind.

“This ought to do it.  Do one of you boys have a lighter on you?” he asked, not explaining how he suspected that one of them did.

Dan put his hand in his pocket, drew it out and held up the contents. “Two,” he said.

Dave turned to Cara.  “Is your pile of yard waste still sitting there by the bins?”

“Yes, I had thought to compost some of it before all this started.  Then I just …”

“Don’t worry,” Dave broke in, “I think this can work.  It’s going to be more than a little dangerous, but I think given what has happened tonight sitting idly by and waiting for someone to take us seriously is not a workable option.  Cara’s right, no one will believe us.”

He beckoned to the boys and Cara broke in, “No. You’re not leaving me out of this.  It’s my fence, my cat, and my child.  I want in on this.”

Dave smiled and the four of them moved together.  He blew a kiss in the direction of his wife.  “Stay here, my Love, and take care of Kiley and her furry friend. We may all need healing yet.”

He turned and murmured instructions, handing the rake to Cara and grabbing her snow shovel from the closet before all four of them moved to the back door.

“Be careful!” Marcy called after them.

Cara was raking the last of the bramble waste onto the shovel, which Dave held as flat as possible and tamping it into a wad of bracken and dried leaves.

“Have you got it all?” he said under his breath.

“Roger, remember not until I say so.  Understand?”

Dan rushed forward and flicked his lighter, rolling the flame as large as possible to light the great ball of dried and drying canes and leaves that Cara had raked into a great big mass on top of the snow shovel.

“Keep it low, so it will burn up,” Dan counseled.

Cara found herself dancing nervously back and forth on her feet, as Dave watched the flames crack and spread on top of the shovel.  He waited until almost the entire mass was a blaze before she saw him count off a silent “three, two, one” and launch the fiery missile over the fence towards the center of the blackberry, where they’d seen what looked like a green maw. 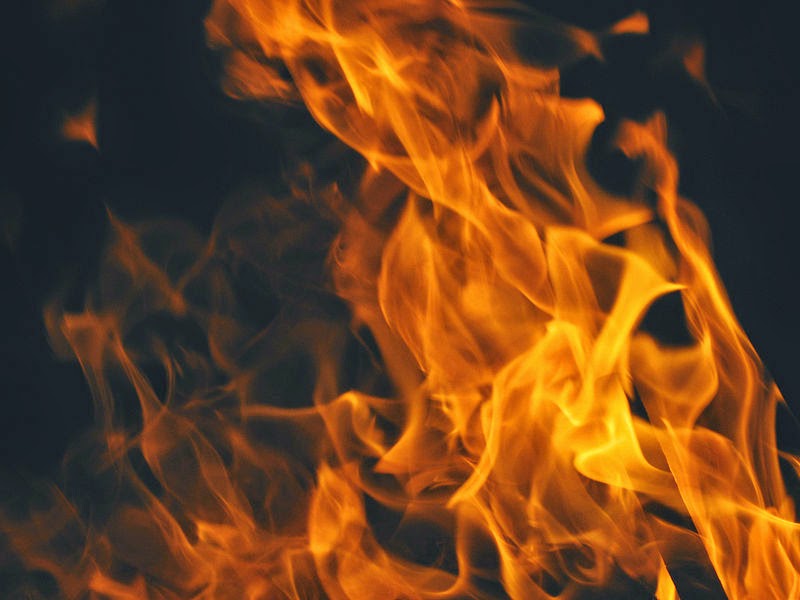 They heard it crackle when it landed and almost immediately there was a painful, high-pitched squealing.
They backed away from the fence, as flames shot eight feet in the air and the squeal got even louder.  It was fully dark now and their missile had clearly landed and the flames taken hold in the empty lot.  It looked like the many canes of the blackberry were flailing and writhing in the air, or it might have just been the maniacal flickering of the spreading fire.  They couldn’t tell which.

A column of flame shot straight up in the air, and the four of them pushed back against Cara’s house.  The squealing reached a crescendo in one epic shriek before the column of flames collapsed.

“Now!” Dave shouted to Roger, who pressed “send” on his cell phone.

“911 Emergency?  Yes, I would like to report a fire at 24001 Crescent Circle. There’s an overgrown lot in flames.  Yeah, It looks pretty wicked.  You’d better hurry.”

He answered questions, finishing the call.

Cara looked back to the kitchen windows to see Marcy and Kiley, noses pressed to the glass watching the flames with big eyes.

The squeal of the Blackberry slowly died away, replaced by the wail of the truck sirens as the Fire Department made its way towards them, through the darkening night.