Welcome to another month. As the release of The Blackberry & Other Tales That Creep moves ever closer, this seems like a great time for a little celebrating of the excitement building about this book and its stories.

So today's "Trifecta of Specialness" Includes . . .


Finally, share this special NO FOOLIN' Offer, and news of my work with your friends and family.  There's always room for one more really good story in your life, and my short stories are journeys that are good for the heart and soul. If you found out about this through social media, it only takes a click to make a difference!

What does "more" mean for a book like this?

Posted by Judith Cullen at 9:00 PM No comments: 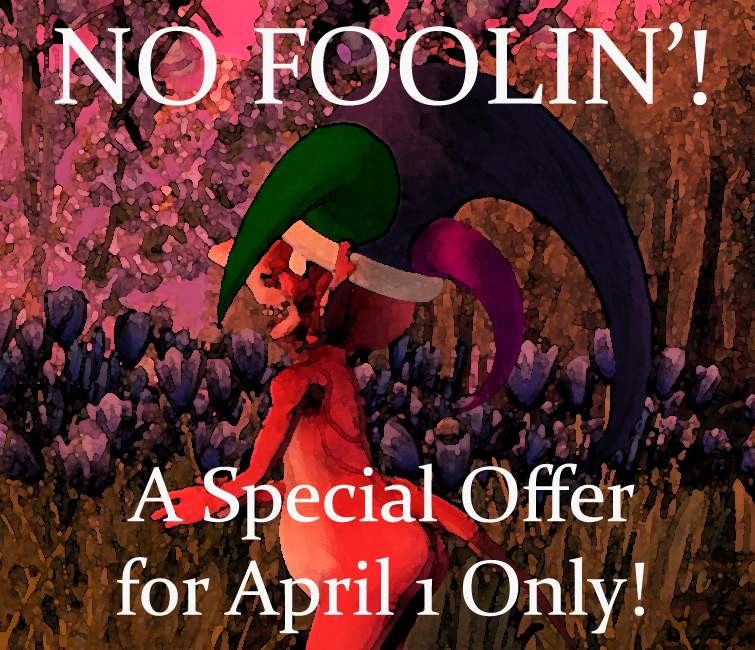 Wednesday, April 1st is All Fools Day in many countries around the world.  BUT THIS IS NO HOAX!  No indeed.  For 24 hours beginning at 12:01am on April First there will be three special offers available here on my website:
NO!  I am not giving you more than that in advance.  END OF CLUES!  Check back here on Wednesday (because YOU'RE NO FOOL!) and find out the "tri-fecta of special-ness" I have planned.

One day only!  Don't forget!

Posted by Judith Cullen at 9:49 PM No comments:

Email ThisBlogThis!Share to TwitterShare to FacebookShare to Pinterest
Labels: Gorak the Gobbler, Judith Cullen, Judy Cullen, No Foolin' Special, The Blackberry & Other Tales That Creep

Here's an early bit of fun.  Early because it has elements of a "Throw Back Thursday" to it, and this is being posted on a Wednesday.  Also early because even as I type, Rick Geary is working on sketches and final art for The Blackberry & Other Tales That Creep.  (I am so excited!!!)

Not to let the cat out of the bag either literally or metaphorically: it is no secret that I am among the "cat-owned" and have been for most of the last 30 years.  Elements of each of the unique feline personalities I have had the pleasure of sharing my life with are in my 2013 collection A Trio of Cat Tales.

In The Blackberry & Other Tales That Creep three of the four stories have cats in them: "Sprinkles" from The Blackberry; "Miss Kitty" from Her Own Words; and "Spot" in Gorak the Gobbler.  That last one is a tribute to Commander Data's "Spot" from Star Trek Next Generation. My cat friend at the time used to love Spot. She would always come up to the TV when Spot was in an episode and pat the screen.

The character of "Sprinkles" from The Blackberry is definitely taken from Miss Sadie, my current cat-panion.  This is not the first time Rick has drawn Sadie (though he has no idea of this cat-nection).  Back in 2002, when Miss Sadie was the resident cat at Tacoma Little Theatre, we commissioned an image of her as she had become the mascot of one of our Education programs.  So here is the Sadie art from 2002, the sketch of Sprinkles, and Miss Sadie in her current capacity as resident art and literature critic.

Also, check out this great video of Rick talking about his art and process. I think it is way cool that he loves his pencils as much as I do, and still uses Rapidograph Pens. Mine are still around here somewhere, and probably need a good soaking.

STILL TIME TO BECOME A PART OF The Blackberry & Other Tales That Creep.  15 days to go and even though we have made goal, more money means more books in libraries, wider distribution, and just possibly more art!
Posted by Judith Cullen at 4:55 PM No comments:

I'm feeling both lucky AND Irish today.  With "The Blackberry . . ." Kickstarter campaign live for less than a week, we have over 77% of the pledges needed to meet our project goal.  A huge thank you to all of my backers - you are amazing and I am honored and humbled by you all.

Here's a little "where are we at?" fun in celebration of our achievement and this day.    Check it out - like, share, comment.  These are all helpful things and cost only your time.

We are so close!  Thanks for joining in on the journey.  If you are seeing this and haven't joined in, come on along - there's plenty of room!

Okay - remember that it was probably not even 6am yet when this was shot!  You can check out the "The Blackberry. . . "  Kickstarter Campaign HERE.
Posted by Judith Cullen at 7:55 AM No comments: 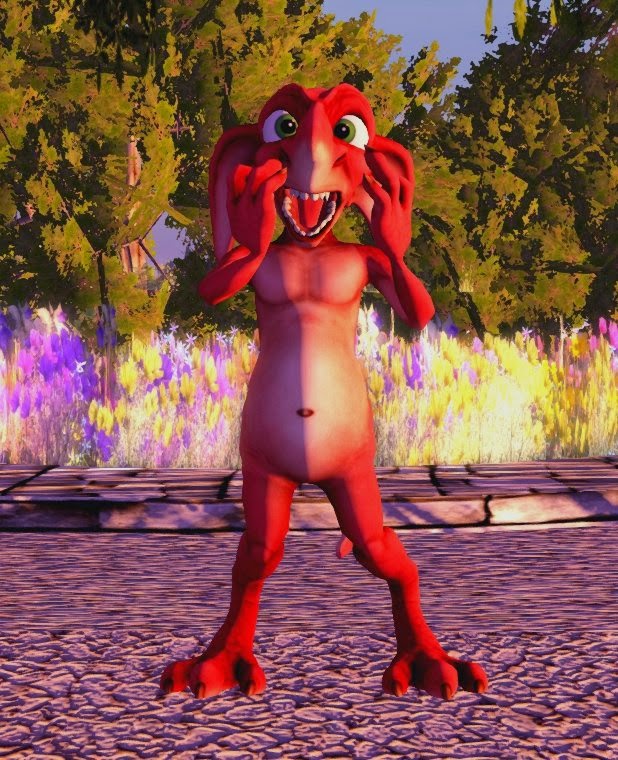 Yep!  The Project broke 1K yesterday, after just four days! So I am going to celebrate!

I will be reading the draft in progress of the entire story "Gorak the Gobbler" which is scheduled to be part of the upcoming THE BLACKBERRY & OTHER TALES THAT CREEP three times over the next few weeks. They will all be live readings in virtual worlds, and on each occasion I will also run it on my stream.

Saturday, March 28th @Noon at InWorldz (a selection only, not the entire story)

Check out the Judy's Stories Live tab above for help in determining how to listen to streamed audio on your computer system.  Check back here for updates in case we have any huge breakthroughs in linking to a player that can be embedded here on the post.

Check out the Kickstarter Project Page and consider becoming part of the project that is this book. Every little bit truly helps.  A pledge of $5 means one more book that can be donated to a Library, free to be read by many people. Many thanks to all!

Posted by Judith Cullen at 8:24 AM No comments:

I REALLY DID IT! I LAUNCHED A KICKSTARTER CAMPAIGN!

Have you ever in your life done something you ever imagined that you would do, and realized that most every learning experience you have had in your life has contributed to it?  Well, that's the way it is with this.  I jumped into it 100%.

I am working to raise $1350 to finish the illustrations for The Blackberry and Other Tales That Creep, and to distribute the book to a wider audience than just making it available for sale on Amazon and telling everyone and anyone about it.

Check out the project page for The Blackberry and Other Tales That Creep and find out why I am so excited about it (excited enough that I actually put my face ON camera) and learn some of the stories behind the creation of it.  There will be periodic updates with new information and new stories over the 30 days that the campaign is live.

Kickstarter is an all or nothing venture.  If we raise more than $1350, then Kickstarter honors the pay-out of more and we do more with the project - more illustrations, more distribution.  If we fall short, we get nothing at all, and The Blackberry and Other Tales That Creep gets published in its simplest form, just like all my other releases.  That's not tragic, BUT the book has so much more potential than that.  You can help it realize that potential. You can be a part of a group effort to bring some great original stories to life in a unique way, and share them for the pleasure of readers of all ages.

Take a look!  I invite you to consider joining me in making this vision a reality. 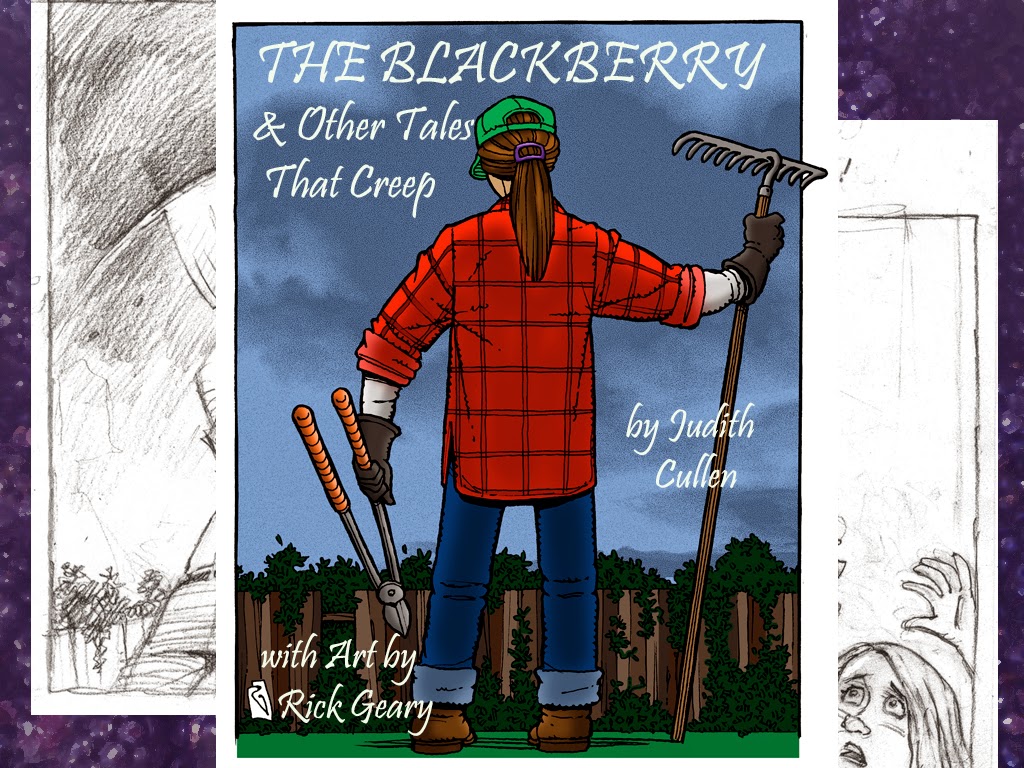 Posted by Judith Cullen at 2:44 PM No comments: