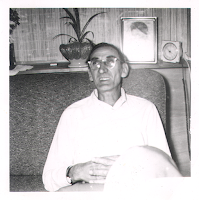 Another of my RFL stories from this year's Fantasy Faire SL.  My paternal grandfather was sick most of my early childhood and passed away when I was four.  The combination of smoking and working in mills and industrial environments as a "saw-file" in the days before OSHA safety standards added up to rapidly advancing lung cancer in his 60s.

But he was an incredibly talented and clever man, who was an insatiable reader. and perpetual tinkerer.  Many is the time I wished I could speak with him, talk about the beauty of natural materials and the wonderful functionality of engineering forms.  But that's the great thing about fiction, isn't it?  And Kayle Mazerath's "Tiny Town" would have been a great place to have that conversation. 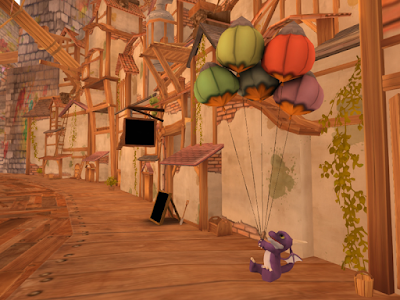 The Steward of Tiny Town
by Judith Cullen
© 2018

In memory of Al Bell, my Grandfather

Impossibly bright. There's no other way to describe it.  I thought I had seen this sort of exuberant rainbow before, but I was wrong.  This town had a vivacity about it, a constant happy industry. It's brightness was irresistible.  Wootberries squishing under tiny gleeful feet.  The jubilant hum and clank of the great waffle press, and the buoyant splashes of color everywhere.

I pressed my hands to my cheeks. What was this new sensation?  I was smiling - smiling so wide and so fully that my face hurt.  The essential energy of was infectious, and I knew at that very moment that it was something from which I never wanted to recover.


It wasn't enough that the colors phosphoresced, that the berries gooshed and the waffles stamped. House after tiny house - doors, windows, roofs peaked, mansard, hipped, all kinds - rose above the streets in a joyful profusion of chaos and competing architecture.  Each wee home had been personalized by its tiny tenant, and the overall effect was one of thousands of small voices shouting "Weeeeeeee! Look at me!" all at once. 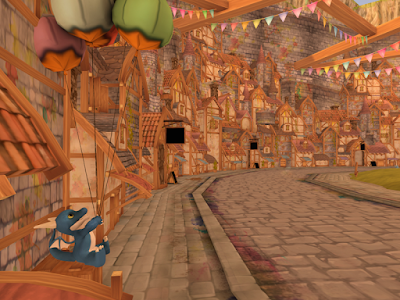 As I craned my neck, straining to determine just how many layers of buildings there were stacked, and precisely how many kinds of different homes there were, I was startled by the loud beep of a bugle horn as a diminutive otter zoomed by on a bright green scooter.

I laughed, and followed the otter through streets that wound and turned.  Was there a single straight or perpendicular line here anywhere?  Faster and faster, laughing with glee because there is no other possible response when you run pell mell through .

The otter lead me down a wooden ramp, the scooter thumping on each plank, and the otter chuckling with each impact. At the foot of the ramp I stopped, looking up in amazement.  There was such a thing as parallel and perpendicular in this crazy city.  It was something I never had even conceived would be something I would find myself looking at.  It was incredible.  It's quaint materials in no way lessened the elegance of its engineering or the brilliance of its design.  For what could be more important than a gigantic waffle press in a town filled with tinies.

As I followed the flow of the batter and pondered the efficiency of the great stamp, I spotted someone who seemed out of place.  He wasn't furry, brightly colored, or even tiny.  He was regular sized - tall even - lean, and lanky.  He was wearing a chambray shirt with berry stains around the cuffs, and a pair of overalls rolled up at the hem to clear his work boots.  Some exuberant seamstress had added extra pockets to the overalls, in bits of brightly colored fabric. There were tools of all shapes and sizes peeking out of the pockets, along with bits of wire, string, and at least one pointy stick. He was wiping his glasses, and then his forehead, with an oversized cotton handkerchief. His clothes had splashes of the same bright colors that were all over the walls of the town. 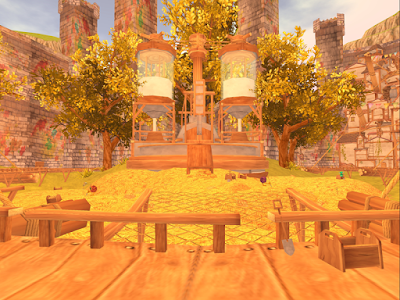 What made this even more remarkable was his face - a face I had not seen since I was very small. "Grandpa!" I shouted.

His pale blue eyes showed that he recognized me, and he beckoned me emphatically.  I had been looking at those eyes in photographs for years, where they had seemed to disappear, as light as they were, giving him an otherworldly look that had always seemed in tune with his absence. I had been 4 years old when he passed away.  But now there he was, reaching into his pocket, and calling out, "have you been good today?"

I stopped in front of him, not sure whether it was safe to hug him, as I very much wanted to do, with all those tools in all those pockets. His hand opened and it was full of peppermint lozenges - not just the pink ones from my childhood, but riotously multi-colored ones - just like the town.

"Yes Grandpa, I think I have been pretty good."

I chose a purple one, and he smiled. I popped it in my mouth and grinned back at him. The candy tasted of happy memories.

"Come along with me, I've just finished up here."  He reached for a small wooden tool box. I recognized the workmanship - he'd created this with his own hands.  Though he'd never made it past the 8th grade, growing up in rural , he had been a brilliant natural engineer, crafting everything from boats and trailers, to drawers and cabinets, and stunningly functional and tables wrought from beautiful woods.  He'd even built a small table top Christmas village, when my Mom was a little girl, hand-crafting each piece down to the miniature lights that actually worked.

He loped along, and I followed, not scurrying quite as much as I had as a child, but still struggling to keep up with this man who always had so much energy that his hands never stopped working.  He was always fiddling, fixing, and fashioning.

He stopped in front of the vast wootberry vat, put his tools down and contemplated it, rubbing his chin and squinting slightly.

"Hmmmm, something not quite right here," he muttered.

I peered around, trying to see what he was seeing.  It all looked fine to me, there was juice flowing out of each of the wooden spouts located at radial intervals around the vat's perimeter. He began to pace, looking all around it.  Then he stopped, bent down on one knee and just listened.

"Nope, that's not how it should sound."

"What's wrong Grandpa? It looks like it's working fine to me.  I mean there's juice flowing and all. Isn't that how it's supposed to work?" It seemed like pretty simple tech to me.

"Ah yes, it would seem to be fine, wouldn't it.  But things are not always as they seem.  It's the hidden things that cause problems.  If you don't deal with them, things get plain old nasty. They don't like "nasty" around here much.  Can't say as I blame them.  It spoils the joy."

With that he reached into one of the wooden spouts; way far back, his arm disappearing entirely.  He seemed to grab a hold and wrestle with something inside the spout, trying to wrest it from where it had seated itself.

"Come on!" he muttered, giving one great pull followed by a loud popping sound. Out came his arm and a twisted unicycle wheel, both dripping with vibrantly violet wootberry juice and clumps of pulp. The juice flowed stronger now, and he worked all the way around the vat, reaching into each spout and extracting one thing or another, as the flow of wootberry juice continued to increase: a broken step stool, a bent gramophone horn, the strangest bazooka I had ever seen.  He removed each, wiped it clean, and checked the spout again before moving on to the next - both looking at, and listening to the flowing, gurgling juice. 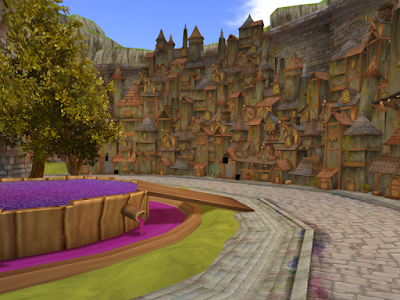 When he'd finished he looked with satisfaction at a small pile of assorted stuff he'd removed from the various spouts. He wiped his glasses and forehead again.  "Yep, there's a whole lot of silly goes on around here sometimes.  Things end up where they shouldn't, and they have to be taken care of."

He looked up at me, smiling, "That's where I come in."  His long arm made a sweeping gesture to the houses of the surrounding town, "Just look at it!  There's sure never of shortage of things to fix and build here: best job I've ever had!"  Moving to the lip of the vast machine, a torrent of juice now happily running, he sat and motioned for me to join him.

"How about you?  Everything flowing the way it should?"

I frowned, confused, "Flowing? I don't know what you mean, Grandpa."

"Well, we all get stuff stuck from time to time, coming a little loose, or out of plumb.  It's the natural result of living. You use the stuff of life, and it needs a bit of tending. Sometimes a whole lot of it. You don't take care of it, and things get wholly unpleasant."

I must have made a face, because he added, "I know, it's mucky at first, but look at what happens once you do, everything flows again."  He pulled two small polka-dotted cups out of the impossible pockets of his overalls, and dipped each into the chuckling berry stream.  He handed me one, and I sipped it carefully.  It tasted of unrestrained laughter.
.
"There's a bit of me in you. Always has been. You're capable of rooting out what's stuck, and making things work fine again.  You just need to do it, and stop fussing or thinking too much about it."

How did he know?

He laughed.  "Everybody does. It's not just you." He looked around the crazy, silly little town again, a look of pride on his face. "Can you imagine what this place would be like if I wasn't here to keep everything smart and running properly?"

I thought for a moment, feeling a new awareness creeping into my heart. I looked across the lawn to a tiny bobcat laying flat out on the grass, blowing bubbles.  "The happy stops working," I replied.

"Just like that," he said, and he clicked his glass to mine.