HONORING A Friend of a Lifetime

This story from this year's Fantasy Faire SL benefiting Relay for Life, was written for someone I have known for a long time.  I cannot, in all honesty, say that our lives have run parallel, Kim's and mine.  It's more like two satellites in adjacent universes.

Our parents were friends, as kids, and we often played together.  We were aware of each other growing up, and then our trajectories separated.  I think I have actually seen Kim in-person once in the last 35 years.

Re-connecting with her through social media in the recent years, I have since learned a lot of things about her life that I did not know; some were things that happened when we were small.  And even though she and I have never been "tight", I found myself feeling for her as one does for someone who has been a constant part of the tapestry of your consciousness for as long as you can remember. 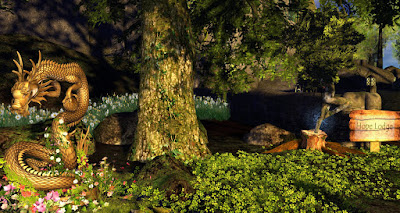 Her hand emerged from the nearly vertical cavern, and I reached for it immediately, helping her.  That bright head popped right up, the natural blonde of her childhood still visible among the gray.  Her skin, always Nordic-fair, was a little worn with living but still shone with vitality and energy.  She was in her element.

"Isn't Ardessa terrific?  I reminds me of home."

"Do you get a lot of Asian dragons and Elvin architecture in the Tieton suburbs, Kim?" I replied, unable to resist teasing someone I had known since early childhood - someone I could not remember not knowing. She glowed in the sunlight.

"Pffft!" She dismissed me with a good natured flip of her hand and a brilliant smile. "Not so much, but plenty of wolves, squirrels and other critters."  Her eyes beamed her with enthusiasm, "I saw the most amazing owl!  The feathers were ... well, it's hard to describe."

She paused, pondering for a moment, and then laughed, "No!"

"Well, this is the perfect setting for you.  I am glad you are enjoying it."

"It's more than enjoying, it's discovering.  There's so much to find here. I'm on a quest!" 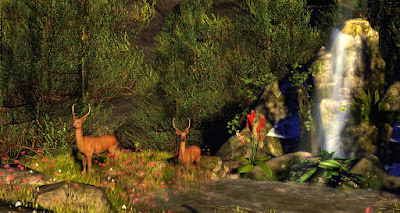 I smiled, replying, "I understand there are a lot of people on the ..."

"Yeah. Come check this out."


I scrambled to follow her as she swiftly moved past the sign for Fernsbea Hollow, and scampered up the high stone steps, and navigated the archways with the agility of the experienced climber she was. Trying to keep up with her was a challenge, and my ascent was a bit more awkward. But I was eager to see what had Kim so excited.

She beckoned to me from the heart of the hollow, an eerie emerald light coming from somewhere within. The air was thick with ethereal lights and the scent of high magic.  The strange light came from a group of statues, ancient Elvin ancestors captured forever in a protective stone ring around a basin where a magical sphere rotated and glowed - the source of the illumination.

She had always been shy, as a child, and her choice of profession as a protector and custodian of the wilds had seemed a natural extension of that.  I had never seen her so animated - never seen such gregarious enthusiasm.  But Kim's excitement glowed as brightly as the sphere. 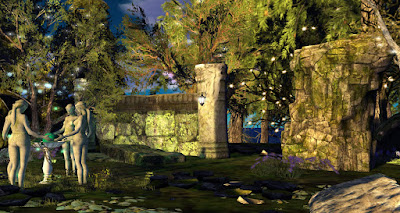 "What am I supposed to see?"


I peered into the sphere and saw vague shapes, a crowd of people, seemingly fair but their features indistinct to me.

Her smile had transformed from enthusiastic to contented.

"Come, let's find a place to chat.  I don't want to overdose on all this enchantment.  Too much of a good thing, and all that. The glowing light is a little disquieting after a while"

So we retraced our path, down the high stone steps and through the Elvin archways.  We wound our way around more dragon statuary and a wide variety of creatures who seemed to greet Kim like a beloved friend: wolf, bear, rabbit. The air changed from ethereal to pungently piney. We stopped at a rustic gazebo, where we sat in spacious chairs and refreshed ourselves while she entertained the squirrels who were making themselves at home on the table. 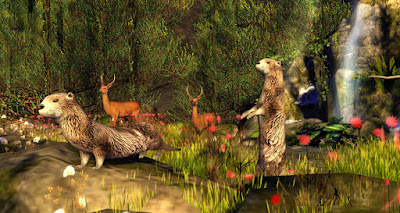 I caught my breath and cleared my throat. "I am surprised you were climbing in the caverns here.  I've heard that there's an entrance to the dreaded caves of Nedra somewhere around. I would think you'd want to avoid that."

She shook her head indulgently at me, "I've gone up against the Unweaver three times now, and bested him every time."

I furrowed my brow, pleased but also a little concerned.

"Oh, I don't kid myself that I've won. Someday, the Unweaver will come back and I won't be so fortunate." She leaned in, smiling that exuberant smile again, "But not yet, and not now.  Do you know what it's all taught me?"

She leaned back, still smiling.

"It's taught me to value what's real: the plants, the animals, the wonders of nature, the people who really matter in my life. It has compelled me to live in the moment, right now, not waste a second.  That's why finding my real family is so fulfilling.  It defines my place, and it's real."

She paused, playing hide and seek with a nut, much to the consternation of one of the squirrels.  Laughing, Kim relented and surrendered the nut to the squirrel who scurried to the opposite end of the table to worry it open.

"When you fight the Unweaver, it's easy to become isolated, despite the best intentions of everyone around you.  Finding my real family means reminding myself that loneliness is just one more of the Unweaver's illusions.  I am not alone.  I never was alone.  I never will be."

I reached for a vibrantly red, juicy apple from the bowl on the table, cut it down the center with the conveniently provided knife, and handed Kim half.

"Take that, Unweaver!" I said.