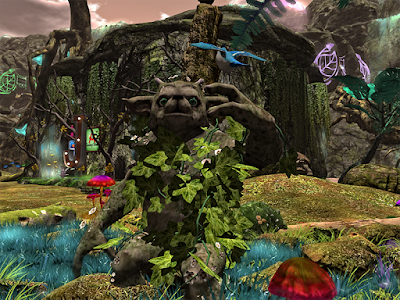 The sound of the water was deafening, and soothing at the same time.  It surrounded and embraced, in a dreamscape as alive with color as it was with motion.

"It looks a little intimidating," came a voice near my waist, "But really, if you look closely its mostly just birds, bees, and butterflies."

He sat down, his deep brown fur blending naturally with rock and moss - he belonged here.  He scratched the ground at my feet and brought his clawed paw up to his muzzle to sniff.  "You're new here.  Have you tried the zip lines, yet?"

I said I hadn't as politely as possible, because it's not everyday that a large brown bear walks right up and speaks to a stranger. But this was the Fairelands, where almost anything can happen.

"Yeah, they look intimidating too, but they're really a piece of cake.  Come on!"

He ambled over to the stanchion marked "Zip Line Down" and cleared his throat to explain, "Now just take it one step at time.  First you set your feet apart nice and solid, so you're balanced.  You see how I am doing it?"

Indeed, he had risen up on his hind legs, which were appropriately spaced for good balance. I nodded.

"Okay now, you grab hold of the bar overhand, like this, see?"  Once more he deliberately demonstrated what he meant, and I nodded that I understood.

"Now, don't you worry about holding on tight," he laughed, "because once yer flyin' that will definitely take care of itself!" He laughed some more, and I could not help but join him.

Peeking over the precipice I saw that it was a long, long, long way down, and there were plenty of rocks and sharp-ish looking things to intercept you on the way.

"Oh, you don't want to do that. Don't look down!  Even when your feet are firmly on the ground, there's always a great big hole of some sort, somewhere around. Some are just hidden better than others.  Best not to think about them.  Best to just get on with the business of doing and being.  You got me?" 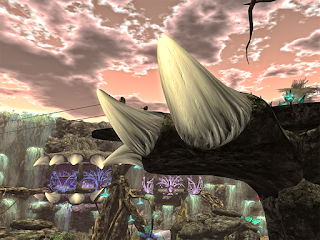 He gestured with his paw to his eyes, "Keep 'em on target. Ignore all the rest.  Keep your eyes on me, and I won't letcha down.  Okay?"

I'll admit, he made it look simple, even for a bear, standing there on the edge, ready to fly across the chasm like it was nothing.

"Now, all you do is lift your feet and let gravity carry you.  No looking around, just enjoy the ride, eyes on your destination."

Several vibrantly colored creatures winged about, audience to the bear as he instructed me.  "And when you get to the end, you just let go. That's real important.  Wait for the right moment, and then let go. Otherwise things get messy and complicated."  He added, "I hate messy and complicated.  Better things to do with my time."

With that he lifted his feet and went zipping along the suspended line, his fur rippling in the wind and his voice lifted in a loud,  joyous, life-affirming cry.

He landed, lumbered onto his four paws and turned to shout at me.  "Your turn now!  Grab on, eyes on the target, and remember to let go."

Butterfly and bird hovered, watching me expectantly.  He made it easy.  But he was an enchanted bear in an enchanted land, so of course it was easy for him.  What about me?  I didn't seem quite so lucky, and I was definitely not enchanted.

"No, no I see what's going on there.  You stop that.  You're over-thinking it. Get your butt over to that line and grab on."

It was the only path to the rest of the land, and he had made it look possible.  His presence had been reassuring, and it still reached a paw to me across the void, beckoning me to join him.  I stepped to the stanchion and, looking up, took a deep breath and grabbed onto the bar.

"That's the way," he called, gesturing at his eyes again, "Now look at me, make me your target."  He stepped to the corresponding stanchion at the end of the line.  "You know what to do.  You just need to do it."

I locked my eyes on his, lifted my feet, and I flew. The air embraced me as I raced along the zipline, and I felt some of the enchantment of the place embed itself into my cells, all the while staying focused on the bear, whose eyes twinkled with amusement and joy.  If it hadn't been necessary to hang on I would have spread my arms out and thrown my head back, and let the essence of The Falls of Hope infuse my entire body, and take up permanent residence in my soul.

I don't know what sound I made, but something came flooding out of me like a howl and a scream all wrapped together with hysterical laughter.  It felt like relief.

When I landed, I let go and stumbled.  The bear had been standing again, waiting for me and he wrapped his big furry arms around me and held me upright.  I was laughing and weeping all at one. I eagerly put my arms around him, happy to accept his support and return it.

I hugged him tight, and he hugged me back.

"That's the whole secret," he murmured in my ear. "The world is full of dangers and things that scare you.  They might be your destiny, and they might not.  You can't worry about that.  You just grab on, and stay focused..."

"... and when the time is right, remember to let go," I said, finishing his sentence.

I gave him another squeeze, and thanked him. 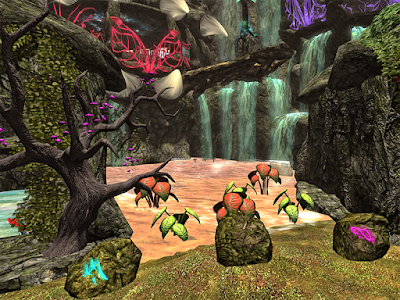 All images by Aoife Lorefield
Posted by Judith Cullen at 6:46 PM