Special Note:  The selection from April 1st is still live, and you can still download and enjoy the audio sample of the slightly-famous "chore" scene  -  Click Here


“That was a quick trip!” Jamie’s Mom observed as he burst happily through the kitchen door.
“Hi, Mom!” Jamie gave his Mom a quick hug that had her gasping from its enthusiasm and the reality of how big her “baby boy” had actually become.  He was almost as tall as his Father, and the thought of it made her head spin.
“It was just a little errand.  It’s all taken care of now.  What’s for dinner?”
“Your Dad and I have an appointment tonight with Mr. Briggs, the accountant.  I’ve ordered a pizza for you.  It should be here in a few minutes. I ordered your favorite: sausage, pepperoni and mushroom. There’s plenty of juice and milk in the fridge.”
“Great.  Thanks Mom!” Jamie kissed her on the cheek, and left the kitchen.  She watched him head down the hall to the stairs.  She was engulfed in amazement.


Jamie was elated as he took the steps two at a time up to his bedroom.  He’d done it!  He’d actually done it!  It really didn’t matter to him what Robbie Martin decided to do.  It was out of his hands and he wasn’t going to worry about it.  He had done the right thing, and he had won a victory.  It wasn’t Robbie he was victorious over.  He had triumphed over himself: his doubts, his fears, and his teetering sense of self.  He liked how this felt.  He liked it a whole lot.
He rushed into his room and swept Spot off the bed, spinning around in a circle with the shocked cat in his arms, hanging on for dear life. “It’s a great day to be me, Spot!” he cried.  He was so happy that he didn’t hear the distinctive popping sound, and did not think to look around the room for someone small and red, with a tail and teeth.
Jamie was laughing out loud and Spot was expressing his surprise and not-quite-total enthusiasm for this interruption to his 43rd nap of the day.  The ruckus stopped suddenly when both boy and cat heard a rumbling sound.  Where was it coming from?
The dresser seemed okay.  The book shelf was still and silent.  There was nothing under the bed, and Jamies’s trunk was immobile. The closet!  That was the only real option left.  Jamie carefully reached for the knobs of the bi-fold closet doors and pulled, more than a little afraid of what was on the other side.
“TA DAAAAAAA!”
There stood Gorak, feet spread apart and arms wide. At least Jamie thought his feet were apart, he couldn’t actually see them.
Gorak stood in the middle of the closet, resplendent in one of Jamie’s T-shirts.  It was so big on him that the sleeves sagged over the tips of his claws, and it puddled around his feet except where it draped over his tail in the back.  The shirt proclaimed in bold letters, “: not the end of the world, but you can see it from there!” Jamie’s other shirts lay in disordered heaps on the closet floor instead of being folded neatly on the shelf where he kept them.
“Jamie got great shirt!  Jamie got lots great shirts.  Gorak had hard time choosing.  You likeee?”
Gorak turned in a circle, and almost fell over as the puddling shirt twisted around his legs.  Jamie grabbed him before he fell and set him down on his feet on top of the trunk.
“Pizza’s here, James!” came the call from downstairs.
Jamie looked Gorak in the eye and pointed a finger for emphasis, “Stay here – right here, please. I’ll be back.”
“Okee!  Gorak wait,” and he plumped onto his bottom on the trunk with the t-shirt billowing around him.
When Jamie returned, Gorak had slid off the trunk onto the floor, with the tails of the shirt dragging behind him. He sat on the floor cross legged with his eyebrows up in a look that challenged.  Jamie did not fall for the bait, but sat down on the floor opposite him with the pizza and the other things he had brought with him from the kitchen. He opened the box lid, and reached for a steaming slice. 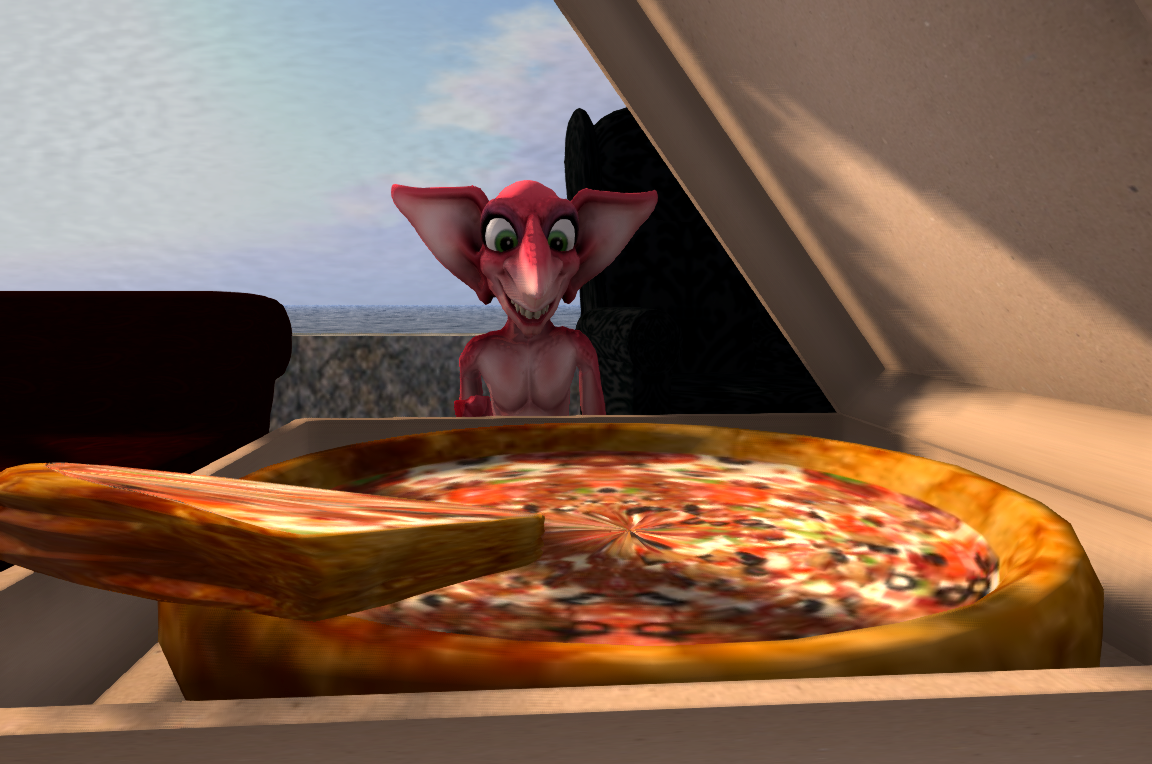 “Shroomies?!” Gorak screeched, “Shroomies for sitting not for eating.  What kinda silliness be dis?” He began picking up individual mushrooms between two claws, as if they were infected, and tossing them on the slices nearest Jamie. “Yeck!”
“Some people actually like to eat mushrooms,” Jamie patiently suggested.
“Yeah? Some people weird too. They can have Gorak’s. More shroomies for them.”
Jamie marveled at himself.  Gorak wasn’t getting under his skin.  He found he could accept the little creature’s ways and not be annoyed.  Or maybe he was just still high from his encounter with Robbie.  He wasn’t sure. He decided not to question it all too deeply while there was hot pizza to be had.
“Suit yourself.  More mushrooms for me.”
Jamie scooped a handful of displaced mushroom bits and dumped them on his pizza slice.
Gorak wrinkled his nose and muttered, “Some people weird.” He focused in on the pizza: reaching for a slice of pepperoni, peeling it off the pizza, licking it, taking a thoughtful bite as if tasting a vintage wine, and then placing it back on the pizza.  He peeled another pepperoni slice and repeated the process, making considering noises.  He paused after replacing the second slice to lick his claws and was just reaching for another circle of pepperoni when the box lid came down with a slam.
Gorak’s startled look met Jamie’s smiling face.  Jamie slid the pizza box away from Gorak, extricated the two pepperoni-sampled slices and put them on a couple of pieces of paper towel.  Gorak watched him keenly, and Jamie had the feeling Gorak wanted to say something, that he wanted to object.  The little red creature remained silent, watching.  Jamie made his own thoughtful noises and reached for one un-sampled, shroomie-free slice and added it to the others.
“Here’s Gorak’s pizza.  It’s great pizza.  Gorak can make his pizza, this pizza, as great as he wants to.”


Jamie handed the pizza slices on the towel to Gorak and sorted through the handfuls of juices he’d brought, opening an apple juice and handing it to Gorak.  Then he resumed eating, slurping the cranberry juice he’d opened for himself and smiling. He hadn’t noticed it, but when he’d been sorting the juice Gorak had tilted his head and smiled at him, his funny little face suddenly wise and warm.
##

This will be the last pre-release installment of "Gorak the Gobbler" before The Blackberry & Other Tales That Creep goes on sale.  To find out the wonderful resolution of this tale, stay tuned and grab a copy when it goes on sale on Amazon for Kindle and in Paperback.
Posted by Judith Cullen at 4:30 PM