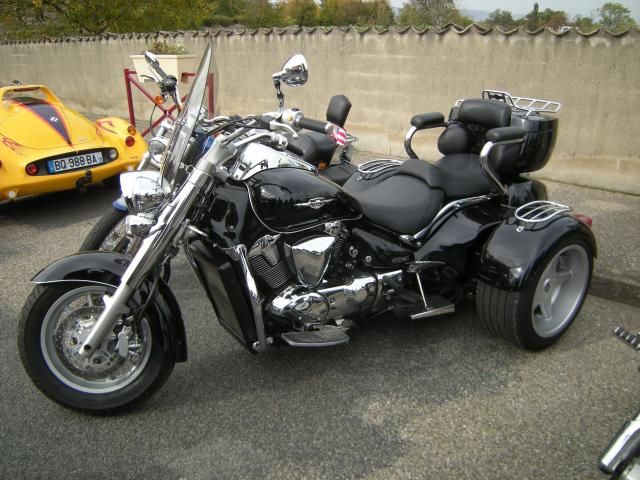 Beauty on the Interstate OR Cool Is as Cool Does.
By Judith Cullen

The Highway is a great rolling stage for drama.  Some are grand and expansive, complete with flashing lights, bells, and confrontations of life and death.  Others of these rolling epochs are simple moments of delight and justice, for where would tragedy be without comedy?

I was in lane two, the second from the left, with a semi-truck in front of me.  It was a clear, uncomplicated morning on the Interstate.  We citizens-in-motion were doing a healthy 65-68 in a 60mph zone:  fast enough to feel like we were being just a bit rebellious, yet not so fast that a slight pause on the pedal would make us respectable to any lurking State Patrolman.

To my left, in lane one was a rare sight: a motor tricycle.  I have learned since that “trike” is the appropriate thing to call it.  Somehow that seem to ill reflect the majesty of the vehicle I saw.  I’d rather think on it as a “Hog-and-a-Half.”

It was a beautiful thing.  It was clearly the pride of a serious and experienced biker. It was not flashy, not too “cherry”, no flames, nothing so brash.  It was shiny and black with just enough chrome details to make it clear that this rider knew his business.  He cruised along at ease with the rest of us, an elegant rolling royal seat among the commoners.

I saw it coming up behind us in my rear view and side mirrors.  It was big and it rumbled.  I recognized the type of driver, and you probably do too.  The type that is almost constantly changing lanes: constantly scrutinizing any little hole or crack in traffic that might shave 25 seconds off their commute.  It doesn’t matter that everyone was already pushing the speed limit.  No one could possibly be going fast enough for this driver, as long as they were in the way.  My father used to call drivers like that “Willy the Weaver.”  They drive like where they have to get to is so much more important than anyone else, and they don’t really care who they put in jeopardy by their manic transits.

This one was in a big Ford truck.  It was not long before Willy the Weaver came up on us and decided that the Hog-and-a-Half was the weak link in this particular layer of vehicular progress.  So, the Ford shifted into lane 1 and chomped up on the Hog’s tail, menacing it from behind.  The Hog did not budge, so the Ford kept on chewing its tailpipe, trying to bully it out of the way with its size and dangerous proximity.  The Hog stayed serenely where it was.

After a few miles, the semi-truck in front of me changed lanes, shifting right to lane 3.  The Ford hardly paused, barely gave signal before starting to move in front of me into lane 2 and out from behind the Hog-and-a-Half.

To my delight, I watched the Hog anticipate this maneuver and sail smoothly ahead of the Ford into lane 2 at almost exactly the same moment the Ford moved.  As it glided to the right, the truck still breathing on its bumpers, I saw the Hog’s driver majestically lift his left arm and salute the Ford with a regally uplifted middle finger.

I wanted to applaud right there in the moving traffic: a rolling ovation to an expression of displeasure that had both class and style.  I wanted to stay behind the Hog-and-a-Half for the rest of my trip, in a show of respect.  I wanted to send the driver a thank you note.

"Thank you where ever you are, Mr Hog-and-a-Half, you brought a bright smile to my face today."

Posted by Judith Cullen at 6:24 AM