I am pleased to welcome a guest posting today: my sister, Maura Cullen.

Way back in the spring I posted Journeys of Triumph and Adversity making sense of the NFL Post Season as the designated sports fan enabler in a family of fans.  My sister also took to writing to express her thoughts and feelings about the Seattle Seahawk's (our local team) near epic loss at the Super Bowl.

Now here we are, and the season is about to officially begin.  There's been all sorts of little dramas along the way - I tell you, professional sports is great theater!  With the Hawks first official game coming this next Sunday, it's not a bad time to revisit why we become attached to certain teams, and why we remain loyal to them.

This essay is written from the perspective of a Seattle fan, but in many ways it reflects how true fans feel about their teams, anywhere.

NOTE: She refers to people "faithfully donning Seahawks gear every Friday" which is a phenomena around these parts known as Blue Friday.  I was in a local grocery last Friday and they weren't just pushing wearable gear.  You could get blue cupcakes, blue bouquets for your sweetheart.  It's a little hard to ignore and yes, I admit it: I have started reading the sports page again.


I suppose that it is an occupational hazard for one who has made a career in the social sciences to be constantly fascinated by human behavior. I have been a practicing school psychologist since 1984 and I still find myself in awe and wonderment as to why people, especially groups of people, do what they do.
Now that football season is over until at least mid-summer, I find myself reflecting on the whole phenomenon of the “12’s.”  Why do the people of the Northwest (and beyond, actually) have such a love affair with the Seahawks?  How did an entire region become motivated to faithfully don Seahawks gear every Friday?  Why has Century Link Field become such a dreaded place for other teams to play? Why have Skittles practically become the new state candy?


The answer came to me through the guise of a string of ads by a local insurance company—not the one associated with the  baseball stadium. Without plagiarizing, the ads speak to the people of Northwest as being “different” and give many amusing examples of this.  I would offer another descriptor for it as quirkiness. We in the Northwest are a quirky bunch. Maybe it’s because of the weather or the fact that there are coffee shops on every corner.  (A friend of mine has relocated to the and has been lamenting that he actually has to drive a fair distance to find a coffee emporium.)  Maybe it’s that lingering pioneer spirit of being at the western edge of a relatively young nation.
So, it’s probably no surprise that we are drawn as a region to a team that exemplifies quirkiness.  It’s a group of athletes that come from very different backgrounds, but have united as a brotherhood. Close to half of the team are undrafted free agents, which tends to make one wonder as to the validity of the NFL draft system. They are free-thinking young men that are not afraid to question the bureaucracy that is professional football. They operate outside of the box through their opinions as well as in their athleticism and let you know that without hesitation.
The stories are endless. We have a quarterback that is supposedly too short, but scrambles away from defenders like the legendary golden snitch. We have a running back that quite brilliantly gets more attention from not talking to the media than he would with a slew of sound bites. We have the Legion of Boom that is famous for frustrating other teams with their propensity for intercepting passes, leaping over the opposing line as Superman leaps tall buildings, and downing quarterbacks before they know what hit them. (“What was the number of that train that just ran over me?”)  We have immigrants from , which might be considered more of an untamed wilderness than the Northwest and whose  national sport is ice hockey. We have a local boy who has made his community proud.  We have a rookie special teams player who has become a household name because he caught a faked field goal attempt for a touchdown. We have a championship won in the waning minutes of a game with plays like an onside kick and a “Hail Mary” pass for a two-point conversion. Are there any other teams that do that kind of stuff?
But, more importantly, we have men who are open about their faith.  We have men who are giving back to this community and to their home towns through their charitable works. We have a team who embraces the concept of possibilities: why not us?  We have athletes who play for each other because they believe in each other. Finally, in the midst of bitter disappointment, they hold their heads high and vow to return, for themselves and for their beloved 12’s. 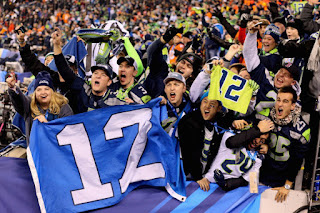 Quirky. The Seahawks just aren’t what a professional football team is supposed to look like. Just ask the NFL!  They are quirky like those of us who have made the Northwest our home. The reality is that the Seahawks are us—their stories are our stories. That’s why we love them.