Five Views of a Christmas Tree
By Judith Cullen 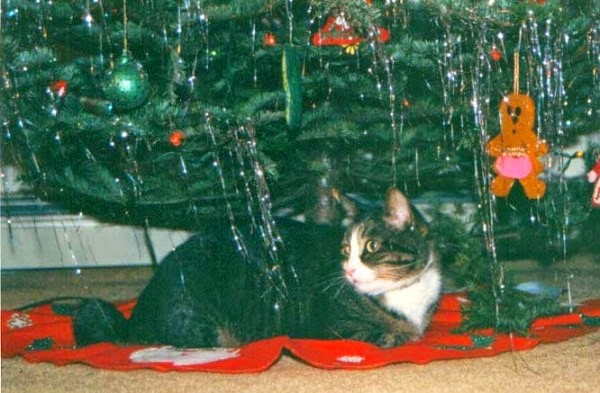 It would eventually be about cats.  My love of furry companionship and the opportunities for feline fun that
the holidays bring would eventually find their confluence. This was inevitable. I was lucky enough to have fairly easy experiences with cats and Christmas trees.  I was lucky. That is, I was lucky until December 1991.

We had finally returned to the .  Three year’s earlier, when I had loaded all my worldly goods into a rental truck and moved to , “we” had been myself and a cat named Sparkle.  On our return, taking up residence near ’s industrial district, “we” were now myself plus two: Sparkle and . A short haired black, had been one of a litter of kittens that had taken up residence in a decaying loading dock along the alley behind the studio where I worked.  Through out the summer we had the front and back doors of the studio open to take advantage of what little breezes there were, and the kittens came in to play.  One day, in the weeks just before Labor Day, this little black kitten came hobbling in crying.  She had been hit by a bicycle or an opening car door and had a fractured leg.  I took her home; saw that she had proper veterinary care.  In less than two months we were moving from to : Sparkle, me, and kitten makes three. I had named her “” since she was black and I had gone to college in the City of that same name in .

We were happily ensconced in our new digs when Christmas time came around.  Having returned to the land of living Christmas trees, I was hopeful that I would once again be able to savor the scent of a holiday fir warming up with the first stirrings of the day, when I turned up the heat and cooked breakfast.

I lucked out: there was a nursery not three blocks away and I was able to purchase a lovely tree there for just $15.  I carried it home, a thought quite remarkable to me these decades later, and got out my tree stand in excited anticipation of my first “real” tree in three years.  I surrounded myself with the many boxes full of my decorations and began to engage the tree in the traditional way: first lights, ornaments, garlands and trim, finally candy canes.  Hours later I leaned back in satisfaction.  It was truly a thing of beauty.  I inhaled deeply of the woody scent and made myself a cup of hot chocolate.  Christmas had arrived and I was home at last.

I went to work the next morning all a-hum with Christmas cheer.  I walked the mile from the apartment through industrial with carols in my head and a bounce in my step.  Crossing the railroad tracks to the shop, I began to contemplate what other holiday delights I could manage that evening, after work.

Back home again, I opened the apartment door and there was an immediate sense of something not quite being right.  There were a few decorations on the floor, but I could simply put them on better branches.  I probably put them too close to the ends.  Then I began to really take a look at the tree.  It was leaning.  Maybe I was more out of practice than I thought.  I straightened the tree and secured it more firmly into the base.  Then I walked into the bathroom.  Now the full horror became clear.

I am sure I said something, possibly I swore loudly.  Scattered across the tile floor of the bathroom were the remains of a small, green wooden Christmas elf.  He had been played with, to death.  He lay strewn in all his tiny constituent parts all over the bathroom.  I picked up his wee wooden nose and looked back into the living room.  Sparkle was sitting on the top of the couch as far away from the bathroom door as she could get, and had an “I told you so” look on her furry face.  A small black head peeked around the door jamb, looking at me with questioning kitty eyes. This marked the official beginning of the battle.  It was a battle I was doomed to lose, but I didn’t know that when the full impact of that first salvo hit me. I was still too steeped in my disappointment.

I responded by taking jute twine, a couple of screws and a screw gun and tying the tree to the wall so they couldn’t pull it over.  Then I rearranged the ornaments and placed them, as I thought, more firmly on their branches.  I shifted everything higher, hopefully out of reach of the kitten.

Day two – nice try.  More ornaments on the floor and part of a garland, but the tree was still upright and nothing was broken, so it seemed like progress.  I did more shifting of ornaments higher.  My defenses were dented but still holding.  The lower 18” of the tree were practically bare. 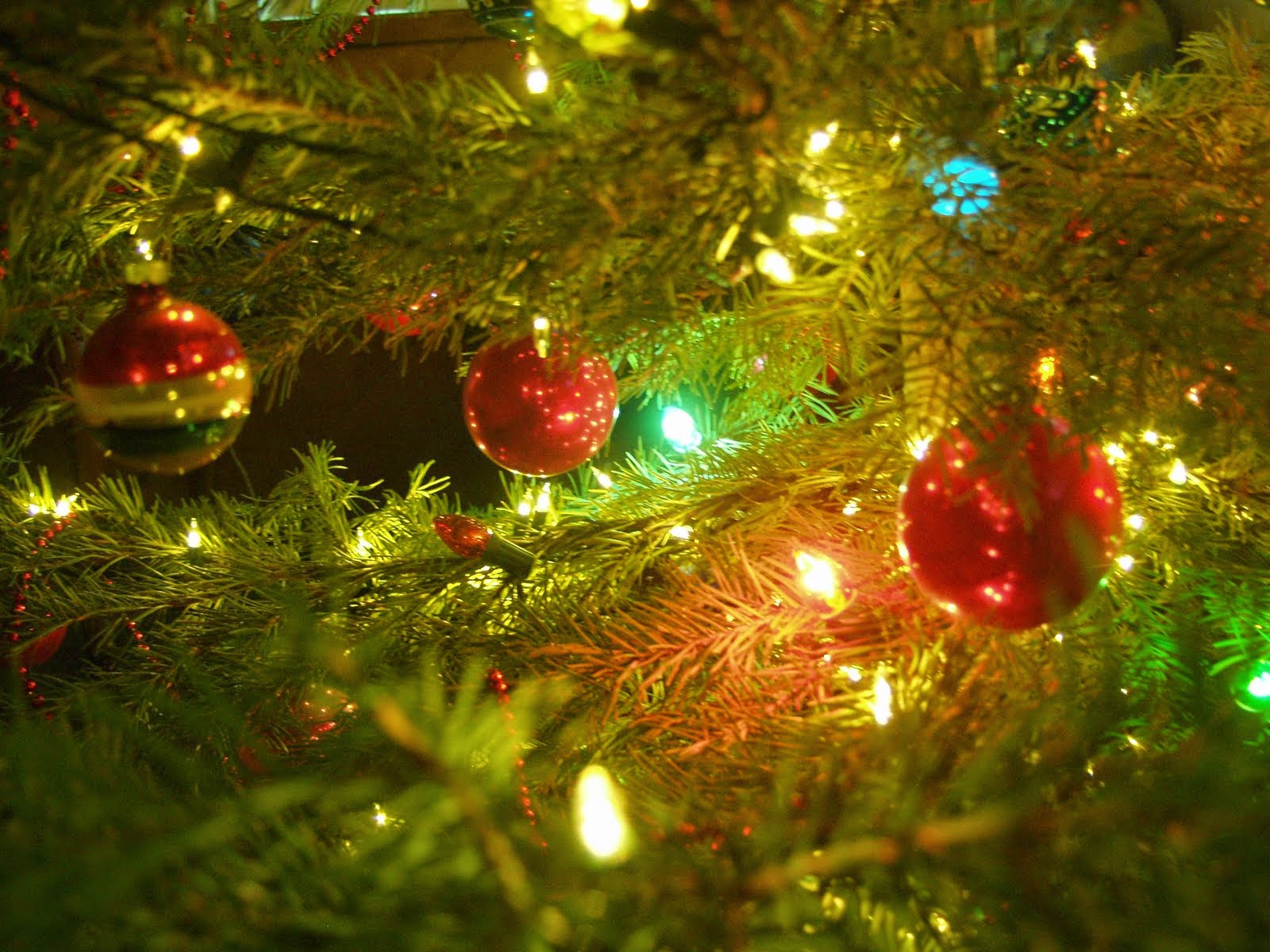 That night, I was almost asleep when I heard it – the jostling of ornaments.  Several ornaments had bells attached and they were tinkling their alarm.  There were two possibilities: either that tree was enchanted and was dancing or the cats where at it again.  In fairness, I believe it was mostly ’s mischief.  This was confirmed when I flipped on the living room light to find a quivering Christmas tree with a pair of golden eyes peering out at me from inside of it, three feet off the floor.  I know I swore this time.

Retaliation!  I met this new offensive with bed linen.  What was I thinking?  I wrapped the tree in bed sheets secured by a winding of more jute twine.  “There, cat!  Try climbing that tree!” How feeble is the human attempt to outwit feline ingenuity.

Back to bed and dozing off.  2am, the tinkling sound was back though somewhat muffled this time.  “This is unreal,” I thought.  The click of the living room light and sure enough, the tree was quivering again. “How in the . . . ?”  I walked over and pulled the percale sheathing open where there seemed to be more subsurface disturbance than anywhere else.  A small black missile came shooting out four feet above the carpet, flew across the room and into the bedroom. Investigation revealed that she had retreated to the protective shadows of the luggage stored beneath the bed.

I took the sheets off the tree, waving them in surrender.  I stripped the tree of everything but candy canes and piled the boxes and loose décor on my drafting table, where the cats rarely seemed to venture.  As I went back into the bedroom, Sparkle looked at me with thinly veiled tolerance from her comfy spot curled at the foot of the bed.

Day three.  I stopped on the way home from work and bought some supplies for a new campaign.  As I opened the apartment door, looked up from under the tree and was off like a shot for safety beneath the bed. I went to work with foil wrapped candies, paperclips wrenched open as hangers, scotch tape, more candy canes, and strings of popcorn.  I completed the creation with a Santa hat on top.  That would become a new tradition – using hats as tree toppers. The overall effect was more satisfying than I expected.  The disappointment of not having “my stuff” out faded in the genuine beauty of this simple “compromise” tree.  I checked the wall trussing to make sure it was holding up, made myself a cup of tea, plugged in the tree and flipped off the room lights.

It was lovely.  The foil twinkled, the popcorn created interesting patterns in shadow and colored light, the candy canes swung playfully ( I had noted that Salem seemed to leave them alone).  It was charming.  Sparkle padded across the back of the couch near my shoulder as I sat appreciating the tree.  I reached up and scratched behind her ears, her neck stretching and eyes squinting in kitty pleasure as she made that throaty rumbling sound of satisfaction. A small, dark form slunk across the floor and crawled up next to me on the couch.  I reached down and stroked her silky fur and she began to purr as well.  Christmas is, after all, the season to celebrate a most important ideal: Peace on Earth, good will toward cats.

All my titles, except for Trio Tales 2013, are available for Amazon Prime Members through the Kindle Owners Lending Library Program, and through the new Kindle Unlimited program. The great thing about both of these programs is that the author still receives a royalty of sorts.  Check them out!
Posted by Judith Cullen at 12:00 AM