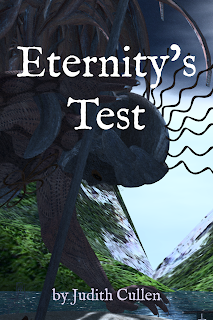 With all the things going on in the world, and in my life these days, I have decided to release December's story of a near fallen angel and the lessons he learns encased in stone and metal in the wilderness over millennia.  It seems like just the right thing to do.

So, keep an eye out for ETERNITY'S TEST to be released this month in Kindle only through Amazon as a stand-alone piece of short fiction.  The time has come: be ready!

For those of you who read the original last year, you may remember that this story was inspired by a virtual world sculpture by Eleseren Brianna (Donna Kantaris).  She also write a story about "The Curio" in which some 19th Century vacationers come upon its compelling presence deep in the Scandinavian wilderness.  Her story was very much one of observation and supposition, done in the format of a 19th C diary.  She asked me to consider creating a story from the sculpture's point of view.  And that, as we say, is that!