When I was a little girl, family members of various generations swore that I was the very image of my maternal Grandma.  “That’s Lillie!” they would exclaim, and reference her 8th grade graduation picture as proof of the likeness.

My Grandma was someone who appeared to be very much in command of things.  She was a strong personality who always seemed to be the key decision maker.  My Grandpa, suffering significantly from the onset of lung cancer when I knew him, was much softer spoken.  I remembered him best in his recliner, and from the polished rocks he tumbled in his workshop.


I was proud to be likened to Grandma Lillie.  For a long time I carried the image of that sepia toned photo in my heart.  If Grandma was that strong and fierce, maybe I could be like that too.  I didn’t see my individuality as threatened by this connection.  I loved my Grandma, and looking like her was a confirmation that I belonged.

It also provided symmetry to our family.  My sister was often likened to members of my Dad’s family.  So it seemed totally fair in my young mind:  Mom and Dad had not gotten a boy and a girl, but they had still gotten “his” and “hers.”

I remember when my sister and I went to visit with our Aunt Grace, my father’s sister.  She commented on Maura’s likeness to the “Cullen side” of the family.  Then she turned to me and pointed out some feature of mine that also harkened to that family.  I was shocked!  This did not align with my “his” and “hers” composite of our visual lineage.  I was from the Bell-Betsinger side of things, wasn’t that apparent? What about that sepia photo of Grandma Lillie at her 8th grade graduation?

Years later, I wrote a series of stories based on tales my father used to tell around the dinner table.  I published a photograph, a headshot of him in his Army uniform, as part of promoting the book.  The comparisons were almost instant. “You look so much like your Dad.”  Remarkably, I look at that photo and I see exactly what they mean.

I have abandoned the concept of “his” and “hers.”  I do know people whose appearance arrestingly can stand comparison to a specific family member.  However, for most of us I believe we are a banquet of features, habits, gestures, and styles that reflect the diversity of personalities that people our heritage.  I also have given up the idea that these things are static.  I think we ebb and flow as time passes, and that we respond to the roles that are required of us at any given moment.

When I was a child, and even a young woman, I was very much like my Grandma Lillie.  More so than I even knew at the time.  My grandma was a hard worker and a passionate spirit who often let herself get worked up emotionally.  This was a side of her I had never seen through my childlike view.  She and Grandpa were also a bit unconventional for their era. They possessed a spontaneity that one does not often associate with ones own grandparents, much less working class people from the mid-west.  It turns out I was a lot more like Grandma than I thought.  As a young woman I too had that same emotional amperage. I too worked with intensity.

Yet as I slog and skid my way through middle age, I find that the comparison to my Father is completely apt for where I am now.  Dad was a dreamer and had a poetic heart, for an Engineer.  He had a great capacity for spatial problem solving, as do I.  It is a trait that has been passed along to his grandson, my sister’s child. I know that ’s natural smarts would make Dad so proud.  He also faced the enormous challenge of shifting careers and direction at middle age.  I know that particular parallel all too well!

This connection also comes in the role I play in my own family, especially now that I have moved back into the family home.  I sit in the spot that was his at the kitchen table.  This was not a conscious choice, yet it reflects some of the roles I now fulfill in my mother’s life and in the household.  I am very much like my Dad, and very proud to be so.  Grandma Lillie has not entirely left me either.

We are the product of those we descended from – obvious, latent. direct, oblique. That rich banquet of our heritage provides us with what we need to face life when we need it, and we can become who we must be as a result.  The vast resources of generations are pre-programmed into us - arming us for a world and a life we cannot ever fully control. 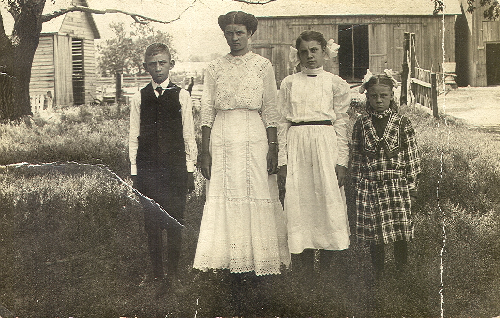 When I embraced this idea, it changed my perspective and opened my heart.  I am still me, still a unique blend of all those who came before me.  But now I sense them, standing with me – ready to offer me what they can.  They are mine.  I am theirs. We face life together even though most of them are long dead, and I don’t even know many of their names.

The other day I was in the elevator going up to an office where I work as a project coordinator several days a week.  As the elevator slowed to the sixth floor I looked down at my right hand, resting on my cane.  I flexed my fingers and watched the sterling silver ring on my third finger twinkle in the changing light.  I thought, “I have my Mother’s hands.”

Note:  My Mother's Hands will be published in my upcoming collection of Essays and Poems - Coffee Shop Talk.  Look for it on Amazon for Kindle and in Paperback.
Posted by Judith Cullen at 1:00 AM