PREVIEW: More from "The Fairy Tree"


Once outside, Liam looked around the farm for something to engage his interest.  This was all known territory, nothing here that he had not already explored to the point of painful familiarity.  With hardly a moment’s thought he started down the short path to the road and did not stop to consider which direction to turn when he reached it.  He just turned any old way, his hands stuffed deep in his jeans pockets, his shoulders sagging and his head lolling forward like a ragdoll.
After ten minutes of crankily tramping down the lane he came to a crossroads and his head came up.  He looked at all the possible directions he could go, and considered what might be the best path.  He took a deep breath.
“Okay,” he admitted to himself, “they were right about going outside.”  The fresh, sweet air felt good inhaling and exhaling.  It smelled of things coming to life and Liam’s spirits began to rise as the energy of the land awakening began to fill him.  He decided to head towards town.  Liam would have been surprised if there had been a mirror to hand and he had seen himself as he started on his way.  His feet were springing on the ground as he stepped, his shoulders were back, his head was up, and he was smiling.


As he passed into town he looked about for anyone he knew or anything of interest.  His mood was not quite buoyant, but it was definitely more congenial than it had been just a half hour before.  He started humming to himself without even thinking, and the smile remained right where it had sprouted.  He didn’t see anyone he knew, but he exchanged friendly greetings with several people and even stopped to chat for a few moments when a mischievous old gentleman in his 80s, Tom Brogan, stopped him to ask after Grans.
“She’s getting around very well now, sir, thank you. She only uses her cane once in a while.”  Liam answered politely.
“Oh yes, you granny is a game one, she is.  Little thing like a slip on a stair not likely to stop her, no indeed.”
Liam listened patiently as the old gent went off on some tangent, his mind wandering and weaving from past to present, and back again. Liam had been working on listening to others more, and blurting out whatever came into his mind less. He was far from perfect, as his encounters with Rose and his mom had shown. In his present mood, standing in the sunshine with the old gentleman, it was much easier.
Tom had always lived in Wicklow, and it occurred to Liam that he probably was brimming over with interesting stories and adventures.  While he had once cringed every time Grans had started into another one of her tales, he found he was beginning to enjoy hearing stories again.  It reminded him of when he was a little boy and Grans would come to visit them in .
“I’ll bet you have a lot of great stories to tell, Mr. Brogan.”
“I do, I do my fine lad, to be sure.  But I suspect you hear many a tale from your granny unless I am much mistaken.”  The gentleman snorted a laugh and playfully chucked Liam on the shoulder.  “You pay attention to your granny, me boyo.  Moira Killough may have been many things in her life: a wife, a mother, a damned cursed lass leading more than one lad quite a merry chase, I don’t mind telling you.  She’s also the closest thing you’ll find to a cailleach around these parts or in these heathen days.  You can bet your money on that!”
Liam smiled and tried to look like he understood, but the old man was a canny codger, and he’d dealt more than his share of confused youth.  He’d even been one once, if he recalled correctly. 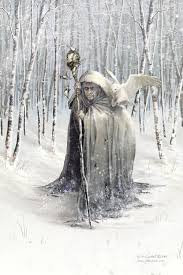 “Do you know what a cailleach is, young man? “
For a moment, Liam tried to fake his way through an answer. It was just forming on his lips when the word “no, sir” came out instead.  He was surprised.  He hadn’t meant to say that.


“Your grandmother knows things, lad.  She’s a wise woman, and I don’t mean she’s just book-learning smart.” Tom leaned into Liam in the unsettling way older people have when imparting knowledge to the young, and he dropped his voice to whisper, “I mean, young Liam, she’s a wise woman.” He winked and stood back up, as much has he could, grinning giddily, “Trust me, son.  If you ever get into trouble around this place, something you cannot puzzle out for yerself?  You ask your grandmother.  She’ll know just what to do to fix things up.  You mark my words.”

##
"The Fairy Tree" will be published as a part of A TRIO OF IRISH TALES II, Coming to Amazon for Kindle and in Paperback this November.

CLICK HERE To read the previous Preview of this story

Check back next week for more from "The Fairy Tree."
Posted by Judith Cullen at 9:34 PM